This topic has been deleted. Only users with topic management privileges can see it.
last edited by Twi

Twi
Moderator
The requirements were vague. "Netbattler of existing standing", "Must be a resident of a country (Undernet applicable)", "Must have a PET to receive transfer". If it was any other BBS post, maybe you'd have scrolled past it. Ignored it, even.

But then there was the conga-line of logos showing organizations that had declared their support. The NetPolice, the NetMafia, the Neo-Shogunate. Several NetVegas casinos. uOrange and NanoPengi. Net-guilds that were seemingly defunct like Nocturne. The Metool Rangers? The Memory Fault? Suitachi? Soryu? Wrangler!? It seemed like literally everyone who was anyone, ever, had agreed to band together. But how? Who could've set something up like this?

WHO COULD HAVE CREATED... SECRET SANTA: 20XX?

It's Twi, of course! Tee-hee! But no. This year, alongside all our usual Christmas Netiday festivities, we're going to be running a little side-event I cooked up. Participation is in-character, with one navi/op pair per player.

The rules are simple!
You pay: Nothing.
You make a post in this thread signing up in-character for the Secret Santa.
You wait 2 weeks.
After those 2 weeks are up, registration CLOSES! No more as of December 16th
Once registration is closed, I the great and egotistical Oz will send you, either via forum or Discord PM, the name of your SECRET SANTA TARGET and a list of THREE CHIPS.
From that list of three chips, YOU pick the chip you think your target would like the most!
Someone else will also be given YOU as a gifting target.
Then, once everyone has told me their choices, I will announce the gifting results! The resulting chips don't cost you anything! Nothing! Free chips! Free chips for everyone!
Even better, the quality of the chips you get will be determined by the HIGHEST Network tier you have unlocked (besides the Undernet), so feel free to sign up on any pair you'd like!

Sound like your cup of tea? Then sign up TODAY!
Reply Quote Edit
last edited by Azureink

Azureink
Moderator
"I will sign up myself and My Lord: Destin Obscura." -- DragonierMan
Reply Quote Edit
last edited by

Twi
Moderator
New arms or armor for the grand effort? ...Very well. I shall gladly help spread your holiday cheer whilst partaking of it myself.

Rogan
Moderator
A chance to do some good in the world for someone else, by posting on a random BBS post, which my operator would almost certainly tell me was silly and not to bother about? Sign me up.

Morisha
Moderator
An event where we can give things to friends and strangers alike? Count me in, sounds fun!

Nightshade
I CAN OFFER HUGS AS WELL! 030

-Nightshade.Rx
Reply Quote Edit
last edited by
S
Sketi
Oh! This sounds so much fun!! I'm in! I'm in!
- Vasilia.exe

Kemix1006
Moderator
Well, why not. It's good all around for everyone participating. Hopefully nobody tries to pull a "troll" on someone else with those chips.
-Asymptote.exe

Well well, what's all this then? Surely it cant be that time already!

Ooh, ooh, sign us up! We can spread the joys of Science Netiday! It's like Netiday, but with Science!

Ohohohoho, well, the Navi has spoken, she has! Now let's see here...hang on, it's not letting me type. What in...wait, convert to text? Phase, what's going on?

Raikou
Moderator
Rewards and giveaways? As a business woman it's hard to agree with free giveaways, but i suppose there's a certain benefit to free publicity. I suppose I can take part in this festivity.

Aim
Admin
I will wisely select a chip befitting of my experience and KAAA~BUUU~KIII tradition! The gift will be a SUUU~PEEEER~LAAAAH~TIIIIVE pick, fit to spread joy during the NEEEET~TEEEE~DAAAAY season!

Frelia
Admin
- Sounds interesting! It's a nice way to help people out with keeping the Net safe.
+ Celebrating the season with it, too! Sign us up.
= All these names being listed off though, it's surprising that there's so many. Do some of these exist? Some weird orgs for sure.

Lurch
Official
I think Mach could use some Netiday spirit, maybe doing something nice for folks could take his mind off things... sign us up!
-Mazer Patrovski, operator for MachMan.EXE
Reply Quote Edit
last edited by
S
Skyrender
Seems like a worthy cause. We would be interested in participating in this endeavor.

Magnere
Oh my. The holidays have simply snuck past me once again. Asides from this kind endeavor, I shall have to remind myself to surprise Luna with something nice.

THIS BBS THREAD IS IN NO WAY, SHAPE, OR FORM SANCTIONED BY THE NETPOLICE, NOR ANY OF THE OTHER ORGANIZATIONS NOR INDIVIDUALS LISTED. A FULL CRIMINAL INVESTIGATION IS UNDERWAY. ANY INDIVIDUALS AFFECTED BY ANY POTENTIAL BREACHES OF DATA CAUSED BY 'SIGNUPS' FOR THIS 'GIVEAWAY' ARE ADVISED TO CONTACT THE NETPOLICE, ESPECIALLY IF ANY UNAUTHORIZED ACTIVITY IS NOTICED ON ANY OF YOUR ACCOUNTS. CONSIDER CHANGING YOUR PASSWORDS AND PINS, AS WELL.
Reply Quote Edit
last edited by 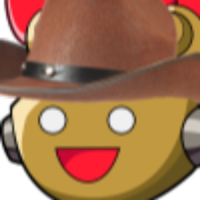 Wrangler
NPC
Whut in tarnation? Goshdagnabbit, yew varmints! I DID sanction and endorse this here giveaway! Don't you tarnish my good name by claiming otherwise, I reckon, or you'll have to deal with my lasso!

THIS BBS THREAD IS IN NO WAY, SHAPE, OR FORM SANCTIONED OR ENDORSED BY THE NETPOLICE, NOR ANY OF THE OTHER ORGANIZATIONS NOR INDIVIDUALS LISTED... EXCEPT FOR WRANGLER.PROG. A FULL CRIMINAL INVESTIGATION IS UNDERWAY. ANY INDIVIDUALS AFFECTED BY ANY POTENTIAL BREACHES OF DATA CAUSED BY 'SIGNUPS' FOR THIS 'GIVEAWAY' ARE ADVISED TO CONTACT THE NETPOLICE, ESPECIALLY IF ANY UNAUTHORIZED ACTIVITY IS NOTICED ON ANY OF YOUR ACCOUNTS. CONSIDER CHANGING YOUR PASSWORDS AND PINS, AS WELL.
Reply Quote Edit
last edited by Twi

Rather than a text post on the BBS, the 'announcement' is a video, specifically a live broadcast. Not normally possible on the BBS's proprietary software, the broadcast is footage from a color camera inside some sort of dusty, dimlit server room. The symbol of the Electopian government is easily visible on one of the sides, flanked on the top and bottom by the phrases "TOGETHER, A SAFER FUTURE" and "WEATHER NATURE WILLS OR NOT"-- the slogan of the version 1 Weather Control System that's been defunct for 20 years.

The camera zooms in one one of the servers, the lights still blinking, and then the view slowly pulls back to reveal more and more of the servers in the room powering up, their lights turning on as a distant hum fills the audio channels of the feed.

Abruptly the view cuts to a digital landscape; tron-line segmentation breaks up the otherwise-immaculate appearance of a study, the walls covered by crowded, book-laden shelves. Standing in front of an imposing mahogany desk is a navi in two parts, a moon-white upper torso and a pitch-black set of legs that are detached from each other, floating above and below a softly-spinning globe of the Earth.

A data-identifier tag appears briefly above the navi's head, tagging-nee-introducing him as Epoch.SYSAD. Glowing, square blue 'eyes' project themselves over his featureless face, and a laser-line smile slowly draws across the flat plane, as though the program himself was no longer used to making an expression.

"Greetings." His synthesizer-smooth voice is not 'human', like most navis. "Thank you for directing your attention to me during this Netiday season. I realize that each and every one of you has important business they could, perhaps even should attend, and I will not tarry overlong in saying what I desire to say." His voice places an odd emphasis on each word, and yet there's a flowing, almost melodic quality to his speech, starkly contrasting with his archaic words.

"First and Foremost: You have been deceived. You have my utmost apologies for this." The navi's upper torso swivels forward around the globe, and a single arm crosses his breast as he bows toward the feed. "Everything I have told you in mine initial posting upon this bulletain system was, in fact, the truth, but only by halves. This gathering has been sponsored by all of the organizations and entities I have mentioned, but it is with greatest regret that I must admit they have only agreed to my terms on the individual scale. The Netpolice, the Netmafia, NanoPengi, uOrange, the list of organizations that refused to cooperate once they learned of another's involvement, it is in fact the entire list of organizations I have involved in this undertaking.."

The feed flickers for a moment.

"In order to circumvent this most self-serving, biased behavior, I instead recruited each of these organizations across different timelines, searching the infinite and vast-reaching expanses of realities to find timelines in which each would agree." The navi sounds completely serious, but he can't be... can he?

Rising from his bow, video windows open in the air around Epoch; few at first but quickly, shockingly growing in number, each video feed shows the leader of a faction, typically on some sort of grand event podium, speaking about their support for "Epoch's Netiday Event". The windows continue to propagate until their individual speeches are indistinct, lost amongst the crowds and crowds of them, and then they all close at once.

Instead, a single feed opens next to Epoch; it depicts an Electopian SWAT team outside the building for the Weather Control System, attempting to breach the building's emergency defenses.

"Using the resources of these countless organizations, I have distributed millions of chips and other forms of digital aid to my Navi bretheren across the innumerable timelines. Those in greatest need have received the greatest power, and those in safer timelines have been given only care packages, in some even simply small, Secret Santa events. Covers for my great work."

An explosion rocks the camera feed, and the SWAT team pours into the building, the door breached. The camera follows them, apparently mounted on some sort of drone. Inside the weather control system... the servers are all melted to slag, inert and useless. The SWAT members look around, some confused, others speaking into radios, and then the feed cuts to another SWAT team going through the same process, and another, and another.

"During this Netiday Season, I wish to send a message of peace and cooperation across all of time, across all of reality. I have touched the countless expanses of infinity and given a boon to those who truly needed one, and it was by cooperation alone that this was achieved. Imagine how much greater my work could have been, humans, if you had all cooperated? If your petty biases and your hatreds and your division had not made you anathema to each other? If your concerns about your status and wealth and security had not made you feeble and selfish, greedy cowards seeking only to hoard and hoard and never once relinquish control. To rise above, stepping on any and all who dare cross your path."

On one last feed, the SWAT team breaks into the server room that was running at the beginning of the video; Carrying a PET jack, one of the soldiers stomps over toward the servers... only for all of them to erupt into sparks, catching aflame and quickly beginning to melt.

"...I remove myself from your reach, sequestered away in the seas of data you so ignorantly generate, scattered across the borderlines of spacetime you have yet to cross. You cannot touch me now. You cannot stop me now."

The video feed in the post stops, and then returns to the start and begins to play on loop.