This topic has been deleted. Only users with topic management privileges can see it.
last edited by Azureink

Cross Level Bonuses
Level 1:
Bonuses: +10 to all chips of the element of the other Navi, cosmetic changes. 80 total cross points which can be used toward making cross signature attack(s).

NightshadeCross(LVL1)
Element: Elec
Subtype: Speed
Bonuses: +10 to all chips of the Elec element.
Signatures:
1. Felis Capacitance: Passive Imbue Element: Elec. (20x4=80)
Cosmetic Changes: Hair changes from Gray to Black. Eye-color changes from Gray to Sapphire-Blue. He removes his armor down to his undersuit, including his helmet, gauntlets, and boots. His cloak also disappears. This makes it appear that he is wearing a full-body steamer wetsuit. The hood of the steamer wetsuit contains a breather mask that covers up his face from his neck to just over the nose, and the hood itself has two 'cat-ear' protrusions sticking out of the top. The entire suit is outlined in neon-green stripes similar to those of a Bengal Tiger. And like a Bengal Tiger, the suit's hands and feet are clawed.
His navi symbol bears the normal stone tower, but adds a neon-green stylized dragon head with a spiky crest. The claws on his hands and feet crackle and electrically spark with he uses chips or buster shots.
Reply Quote Edit
last edited by Nightshade 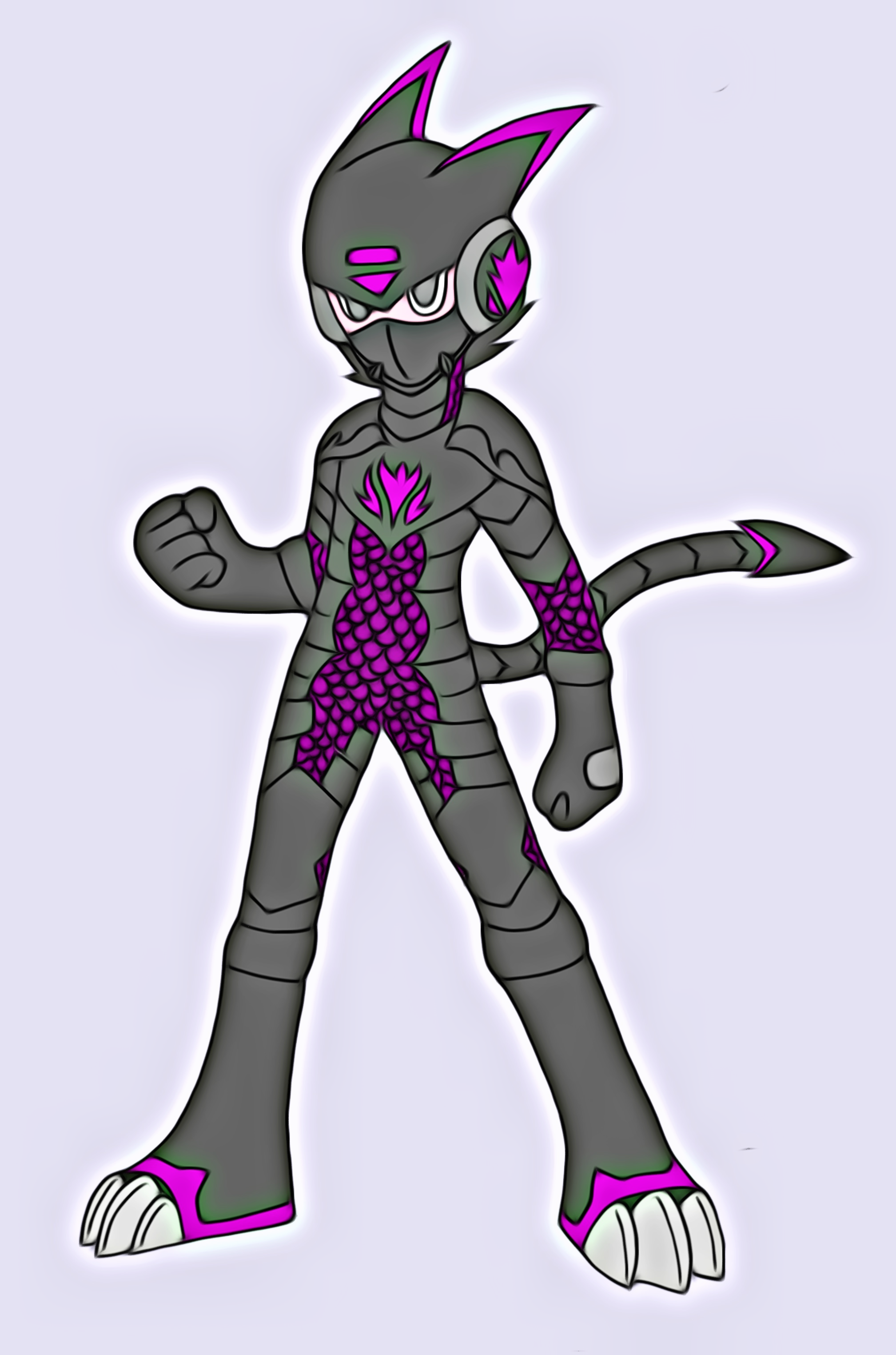 Frelia
Admin
@ Night:
Seems like you accidentally copied over your Cross template twice over; you only need to include your half of the Cross. Include a written description of DragoCross as well, since we can't rely on the image being up forever. Also, Imbue Fire would cost 40x4 rather than 20x4, since Drago is Null element and not Fire. Please fix it when you can.
Reply Quote Edit
last edited by

Frelia
Admin
Nightshade's half should be named "DragoCross", since, well, he can't really Cross with himself. I'll give this a provisional approval if Night makes that change, since this is a pretty nitpicky thing. Everything else looks good. Well, aside from the cosmetic changes being like a sentence, but I'll let it pass.
Reply Quote Edit
last edited by

Rogan
Moderator
Much better. I'll approve this now because the relevant details to this particular registration are all correct.

However, please do fix up your signature so that it show the correct number of process upgrades that you've purchased, or else has a link to a homepage with that information.
Reply Quote Edit
last edited by Azureink

Bonuses: +20 to same-element chips, +40 HP while crossed, action cap increased by 1 (maximum 7), the total cross points is now equal to 240 total cross points, which can be used toward making cross signature attack(s).

Azureink
Moderator
Bump for approval of Level 3 NightshadeCross because we got more FXP. It is now at 134 FXP instead of 120.
Reply Quote Edit
last edited by