This topic has been deleted. Only users with topic management privileges can see it.
last edited by
S
Sketi
Shelving Rayner & Joan for Vasilia and Sophia! :D

Appearance:
Sophia has dyed the tips of her curly brown hair a bright pink. She's pretty short at 5'2. She keeps fairly active for a teenager but hops between activities too much/soon to really have any noticeable effect on her physique. Cargo shorts and a shirt with a crazy graphic splashed across the front tends to be Sophia's low-effort wear. The more abstract the design or outrageous the colors the better. She does have a portion of her closet full of dresses and skirts and likes to joke that she inherited her fancy fashion sense from her Sharoan mother and her practical wear from her Netopian father.

Personality:
Sophia is an activity butterfly. She flits from club to club at school. She likes learning and doing new things, and not always in that order. Approaching a person is easy but approaching a group (like a table of friends, members of a new club, etc) is hard. She tends to suggest and carry out plans above her means of execution without a sensible enough person to keep her grounded.

PET Modifications: An older style PET with a few aesthetic changes. The main body is black with bright green buttons and trimming. Has a few scrapes on the bottom and wear and tear from a past life of high activity.

NetNavi
Name: Vasilia.exe
Gender: Female
Element: Wood
Subtype: Bug
Appearance:
Vasilia looks only barely humanoid these days. For a head she has a sphere of black walnut wood, with her emblem of a closed green bud from a plant set where a face would normally be. Atop of her head sitis her hat, a wide-brimmed witch’s hat with an extra curly top and a wide ribbon around the base. Lacking a neck, or indeed any other sort of attachment, her head floats above the top of a curvy, hourglass figure with a ribbon tied around the middle. Floating to either side are her hands: three fingered white gloves with pointed fingertips and swirly, stylized 6’s for fingerprints. They change size at whim, and constantly trail tiny streams of what looks like blue fragmented data from the wrist. Below the hourglass shape are what appear to be a pair of short boots with ridiculous heels and extremely curly toes. These too constantly emit a trail of blue glowing fragments from their tops where normally legs would meet them. The blue of the fragmented data is the same shade as her magic takes.

Vasilia's shadow is home to a rather interesting phenomenon. A multitude of ghostly, malformed hands with fingers ranging from two to five to six or more appear to push against the tiles of the Net, attempting to escape. Typically Vasilia's shadow only appears wavy or flickers oddly, when she uses signature attacks that make use of the hands, the hands become easily spotted. They're creepy enough that Vasilia would rather not have anything to deal with them. 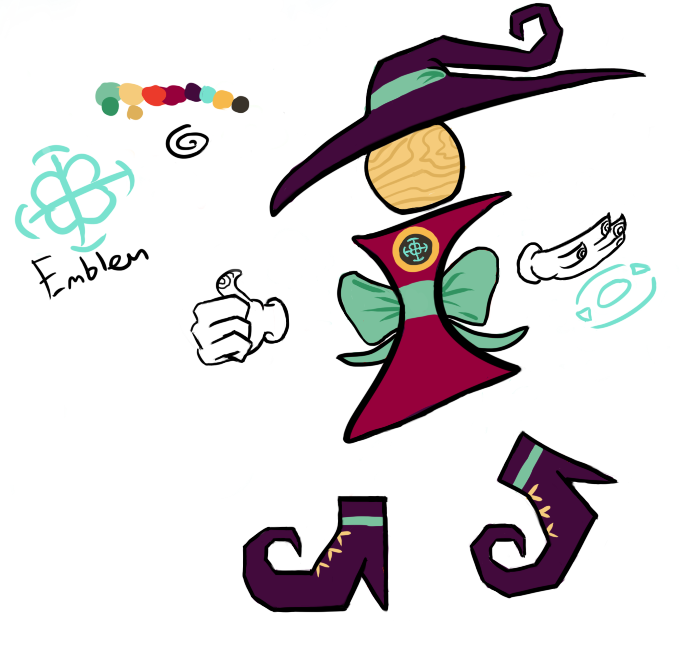 Personality:
An air headed but friendly Navi. Vasilia is exuberant about her new-found ability to talk to people. She tends to be bad at personal space or boundaries but once she realizes she has overstepped she will do her best to make amends. She's very easily flattered and tends to trust those who flatter her because hey they have good taste and must be a kind person too!

History:
Vasilia was given to Sophia as a moving away present from her uncle. He handed her a carefully wrapped box just in time for it to make it into her checked luggage and told her to open it once she got to Electopia.

Custom Weapon:
Her broom, her magic, the hands, and herself. She works her magic through sigils she creates, either the sigil itself does something or it acts as the target for something else. Her magic is always a brightly glowing green.

The hands refers not to the visible floating hands Vasilia uses (although they are often used too) but instead the semi-transparent hands that rise out of the Net around her to occasionally. Vasilia doesn't know what they are or where they came from, only that she's feels uneasy when she sees them.

Signature Attack:
Sigil of Gathering - Vasilia traces a sigil in the air then tosses it near the enemy. This summons the multitude of hands over to that area to drag everything within reach toward the sigil.
Charge Time 1, (Pull + Glitch) Blast2, 2 TCD
(10 + 20) × 2 = 40sp + 20np

Kick Out! - Vasilia enchants her shoes with paired symbols of protection that allows them to kick away or block attacks without damaging her.
2-Hit Shield and Counter(Last Shield broken): 10 Wood + Knockback + Self Slow, 2TCD
40sp + 20np